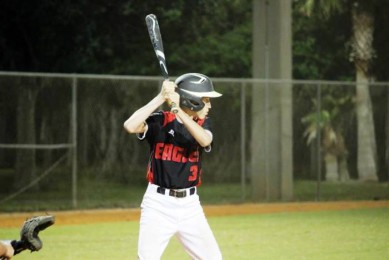 A young Eagles offense is rounding into shape just in time.

Several teams have a very realistic chance at reaching the district championship. State realignment brought these strong programs together now, and it is a group that includes three clubs with state championship experience.

Facing talent of that caliber is nothing new for these clubs, as they each come from districts that were just as tough last year.

“I don’t think I’m going to miss Trinity Christian and I won’t lose any sleep over that,” joked Jupiter Christian manager Mike Lord. “But we’re excited. John Carroll is going to be a good battle for us and that is a good program we have to play and Highlands Christian is always good. So it is going to be exciting.”

Pitching depth is a strength for many of these squads and there could be many low-scoring and exciting battles this year in 3A-7.

A very young and inexperienced Crusaders squad from a year ago returns seasoned and ready to show how far they have come in their development. The team did not lose anyone from the roster to graduation, and that experience together should pay large dividends.

“These guys were all juniors last year and now we have five seniors, which always makes a big difference with the physicality, experience and the maturity,” manager Steve Carp said. “You can see it in their games. The combination of those seniors plus some really young talented guys and a few juniors, we have a nice mix this year. We expect to do well.”

Carp comes from a strong pitching background, and over the past year he has worked hard to develop his pitching staff. Now the fruits of those labors are showing and the player’s dedication has led to a deep staff with several capable hurlers. The Crusaders have as many as eight reliable arms they will turn to throughout this season.

“Our depth is definitely really good because then you are not always relied on everytime,” said senior Kyle Cattrysse. “When we have that one big game during the week we have multiple pieces that we can fit in, especially if the team maybe has more lefties because we have a few lefties we can get in there. So we can mix it up and you are not always going to be that one guy that always has to pitch that big game and always has a lot of pressure on you.”

The Knights delivered a great showing in 2015 by advancing out of a deep and challenging district to get back to the regional playoffs after falling short of that goal the season before. The team finished strong but stumbled at the onset of the season, and manager Bruce Charlebois is certain that his guys will storm out of the chutes at the start of this season.

“We want to compete at a high level every rep that we take and we want to win every pitch that we take,” Charlebois said. “It is just getting ourselves to the mental place we need to get and getting the physical side of it to be able to achieve those things. There is no question that we are going to be on the attack a lot more. Our goal is to get after it everyday and win every single game, but without winning the game of life we are not going to do that.”

The guys push themselves hard every day in practice to reach their maximum potential. It is a team with a lot of versatile athletes and high baseball pedigrees. The program has enjoyed plenty of success over the years, but in recent times it has not always gone their way.

“The past couple of seasons we have been in the postseason and we have got heartbreaks that happened here and there,” said junior Kyle Bombardier. “This year we want to be different and win.”

After playing below their level at the start of the season last year, the Rams turned things around and put in a great season that took them deep into the regional playoffs. The team pitched well all season, but when the defense came around and the offense began delivering timely hits the club really found its identity. With the majority of that team back now and the confidence as high as ever, John Carroll is looking to have a special season in 2016.

“We are looking forward to another great year,” said manager Andy Wells. “We had quite a few transfers come in and we retained our entire pitching staff and all our starters. Being in a completely new district this year will be interesting to us to suit it up against completely different ball clubs.”

At the front of this strong pitching staff is senior ace Chase Solesky, a proven star who gives the club a chance to win every time he toes the rubber. With a guy like that on the roster it helps take pressure off the offense and guys know they don’t have to necessarily score 10 runs in order to win the ball game. Even as he commands a lot of attention on the field, Solesky knows that it takes a team to be successful and he is just a part of that equation.

“This year we trying to be a good team, and we’re not just trying to be family and friends on the baseball team but brothers in general,” Solesky said. “We had a meeting last year that was like, ‘come to Jesus’ and we knew we needed to get our stuff together. That was really when we started playing good baseball and really gelled together. This year this team is really close and we have played baseball together since we were young, and we have a lot of young guys who are going to build this program up in a year that could be even better than this.”

Seniors Sean Farmer and Nik Constantakos are two incredibly seasoned veterans who have been a part of the program for many years. In their final go round of their high school careers they are looking for big things and are excited to accept the challenge to lead the team.

“They are both seniors and they are both going to college, so I ask them to take ownership and they have to push themselves and lead,” said manager Mike Lord. “Both of them are kind of quiet kids so it is not in their nature to be ra-ra guys. I told them you do not have to be loud but you do have to set the pace in practice by how hard you work. That can be their legacy to leave for those guys.”

As Constantakos puts it, they are just a piece of the puzzle. The best way to success is unity and cohesion between each unit, and even as a seasoned ace who will see lots of action in the big games he knows he must still rely on his defense and pitch to their strengths on that side of the ball.

An exciting new addition has the team looking forward to playing home games this year, as the parents and the school redid the entire baseball field for them this season. It is a brand new infield with cutouts, brand new batting cages, a good sound system and a big-league turtle. So the team will play more home games this year to enjoy the new treat they have been given.