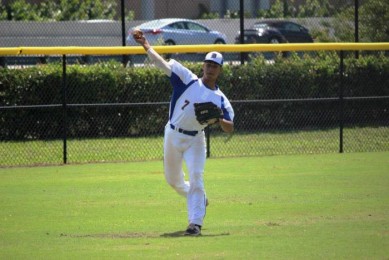 Anthony Padilla and the rest of the Defenders are ready to prove they are up to the challenge this year.

One of the largest districts in the state pits teams from across Broward, Palm Beach and Stuart counties. The slate of district games will eat up a large portion of the schedule as each club vies for positioning in the district tournament. Coming off its first district title in five years Trinity Christian drops down back into Class 2A, and the Warriors are widely considered the favorite in the district.

“We know what we’ve got to do and that is on March 5th. That is the one game we have to win this year,” said Lake Worth Christian manager Kraig Lawrence. “We know we are going to step on the field and take care of everybody else. We have to go out and do our job and win on March 5th. It’s a big game. It is just another game, but we know what we have to do that day.”

Leadership was something that was lacking in the program when manager Kraig Lawrence took over last year. He credits his staff to doing a great job of putting in a system of accountability that helped develop leadership. Now just a year later the team has reached the point where they can start practice and run things even if the coaches are not there yet.

“The expectations of what is expected of them is raised now,” said Lawrence. “They didn’t know it last year but they know it now. We play a lot of small-ball, which is different than a lot of other South Florida teams. But we play our brand of baseball; we are going to run on the bases and use our speed. Last year against St. Andrew’s we bunted 17 times and the coach got to the point where he begged us to stop bunting.”

The building process has come along well for the program. This year the numbers are so large that the school is able to field a JV team for the first time ever. There are a lot of talented young players that could earn playing time. Recently the team’s former ace Orsen Josephina started on the mound in a big college game as a freshman, and the four seniors on the current roster are also likely to play college baseball next year.

“It’s a huge accomplishment for me, because I started playing baseball two years ago and i was the player sitting the bench and not really making big-time plays,” said senior Anthony Padilla, who was originally brought into the game because of his tremendous speed. “Then Coach Kraig came along and I asked him what I had to do to play college ball. He sent me a list and I set my mind to it and I haven’t moved since. The drastic moves I have made make it a big accomplishment that I will be playing college baseball. I try to keep my mind and my focus on and nothing is going to stop me.”

State realignment has the Warriors salivating at the possibility that they could be reunited with their old rivals Miami Brito in the playoffs this season. While careful to note that business must be taken care of along the way to make it a reality, Trinity Christian is using the motivation of that possibility to drive them this season. For many years these two clubs battled in epic playoff meetings, typically in regional finals that determined which of them advanced to the state Final Four.

“Hopefully that will be the case this year. If we both get there, it will be just like it was five years ago,” Warriors manager Miguel Cuello said.

Although the team won the district last season, it dropped the opening round of the regional playoffs for an early exit. It is a stronger team returning this year that includes 10 seniors, lots of speed and a ton of pitching depth. The offense is expected to come around, and if it does the Warriors could be as tough as ever.

“I feel confident in my team,” said senior Jowenrick Daantji. “We just have to go out and play hard to win. Last year we lost in the playoffs but we feel more confident now.”