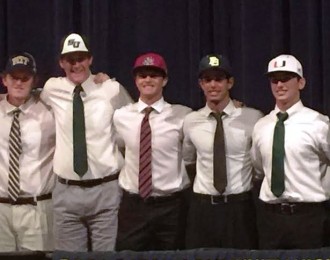 Across South Florida and the nation high school seniors realized their dreams coming true of moving on to play college baseball. National Early Signing Day has become such an important occasion that it has now been extended to encompass a two-week stretch in which senior athletes are able to sign their college letters-of-intent with their respective colleges. Over these past two weeks numerous baseball players across the area embraced this opportunity to make their commitments official.

Boca Raton celebrated as five seniors all marked the big occasion by signing together during a school ceremony. Mike Amditis signed with the University of Miami, Christian Flint with South Carolina, Ricardo Gonzalez is headed to Palm Beach State, Mitchell Senger to Stetson University and Zach Zientarski will attend Pittsburgh.

“This group is obviously very special,” Bobcats manager Scott Morrison said. “Their commitments speak for themselves. Boca Baseball has a rich history of players playing at the next level, whether its collegiately or professionally. But I’m sure we have never had a class with so many commits to such established programs. combine this group of signees with the remaining seniors that will commit by the end of the year and our success that we experienced last year, I believe our program is definitely headed in the right direction.”

Having the occasion recognized with a ceremony encompassing all the people closest to the signees helps make the memory more lasting and important. With all the attention on them, guys appreciate having their buddies and teammates there alongside them to help share the glow of the spotlight. Despite a little nerves or stage fright, the signing ceremonies are something the guys all look forward to.

As exciting as it may be, the entire process of finding the right college fit can also be a strenuous and challenging experience. As each senior lifts that pen and touches it to the paper, there is an unmistakable euphoria that occurs to help wash away all the weight that bore down on them along the way. Any pressure felt is immediately swept away and replaced by the satisfaction of reaching the peak.

There are plenty of seniors still awaiting their chance or still making their choice, and those who have now signed can relate to what they are still going through. The recommendation is to find the place that feels right and to trust your decision when that time comes. Once a guy knows where he wants to go, the process gets easier to manage until you reach the finish line.