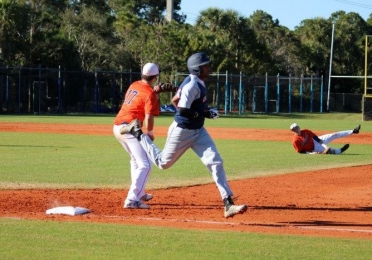 Close plays like this will have much larger significance for Benjamin and Oxbridge Academy, who now compete in the same district after realignment created many new district groupings this season.

The 2016 baseball season will provide some fresh competition and new rivalries. Following a state reclassification that resulted in a major overhaul of the current format, many teams will be squaring off against some unfamiliar foes this season. Expanding into a 9A classification, Florida’s baseball teams have increased in numbers to support the need for such a move.

These changes are reflective of the national overall growth of high school athletics, and particularly in the sport of baseball. According to a report published in mid-August by the National Federation of State High School Associations, baseball increased by nearly 4,000 participants nationally last year. Those new to the sport will now enter into the largest classifications Florida has ever seen, and incoming freshmen will play under this format their entire careers as these changes will remain in place for the next four years.

The central reasons that the FHSAA voted to pass the proposal during its final meeting of the school year was competitive balance and to curtail the rise of programs electing to leave districts to play as independents. In baseball and softball’s last district cycle, Class 4A enrollment numbers ranged from 466 to 1,208, a gap that the FHSAA said was too wide. Similar but smaller gaps existed in 3A and 2A.

After only four years under the current structure when it expanded from six classifications up to eight, Class 9A now comprises the largest schools in the state. South Florida teams make up exactly half of the 16 districts in Class 9A, as well as a third of the Class 8A districts.

In most areas the changes will have little to no effect on teams. Most clubs will continue to compete in districts with the same teams they are used to facing. The most significant change comes in longtime rivals Nova and St. Thomas Aquinas parting ways from district play.

“I am not a fan of the district change,” Raiders Manager Troy Cameron admitted.

St. Thomas holds a 10-game winning streak in this storied rivalry, and over the past five seasons they have played 16 times. In 2013 and again last year the two rivals faced off four times, and Cameron is hopeful the two clubs will still be able to schedule one another this season and keep the tradition going. 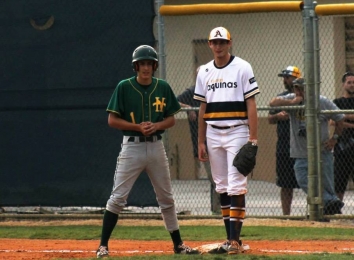 Longtime Rivals Nova and St. Thomas Aquinas will no longer be competing in the same district.

A few programs have landed in a three-team district, a unique scenario to now be adjusted for. 8A District 13 includes Atlantic, Coral Glades and Spanish River, 6A-14 sends Suncoast north to face Fort Pierce Westwood and Port St. Lucie, and 5A-16 pits rivals Key West, Gulliver Prep and Keys Gate Charter together. In a three-team district the top seed earns a bye to the district championship, as well as a berth into the regional playoffs.

“I think the three-team district makes for a lot of fun,” said Keys Gate Charter Manager Richard Benavides. “We are now playing two district games against each team instead of one, and we’re also hosting districts for the first time. It should be a great experience for our team and for our seniors in particular. Our entire season is being set up where we have our number one guys going for all those district games.”

Classifications from 4A down to 1A all represent a drop to eight districts in four regions, rather than 16 districts as represented in classes 5A to 9A. The reduction of the total number of districts in these smaller classes has resulted in much larger overall districts. Those districts have an average of six teams represented, with some as large as nine schools.

District 2A-7 is one such example of a nine-team group, a combination of many clubs across Palm Beach and Broward County. Most of those teams have typically competed in much smaller districts, and will have to adjust to the addition of several more district games within their schedules.

“It will be a fantastic alignment,” said Clint Erickson, Manager of 2A-7’s Boca Christian Blazers. “It is challenging for sure, but we are certainly up for the challenge.”

Regional tournaments will play out similar to how it has been. Regionals will begin with a quarterfinal round on Tuesday, April 27th for classes 5A to 9A, with classes 1A to 4A then beginning regional semifinal playoff games on Wednesday, April 28th. Classes 5A to 9A play their semifinals on Tuesday, May 3rd, while classes 1A to 4A will hold their regional finals on that date.

The addition of another classification has not changed the dates of the state tournament, which will again be held at jetBlue Park in Fort Myers. It is unclear how the schedule will be accommodated for the addition of three more games. Classes 1A to 4A are presumed to begin play over the first weekend of the tournament, which begins on Wednesday, May 11th.