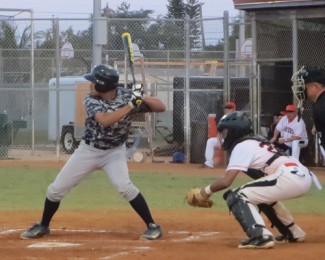 Anthony Acino had three RBIs on the night, including a two-RBI single in the fourth.

It’s not every day when a game to determine third place in the standings can have such major implications.

Tuesday night’s 8A-10 matchup between Spanish River and John I. Leonard wasn’t your everyday game. On the line was the potential for the three seed in the district tournament and with it, a first-round bye as well as getting to avoid top-ranked Park Vista until the championship game. In the end, it was the Sharks who prevailed with a convincing 12-0 decision.

For the first three innings, it seemed as if neither team was going to surrender a run on the night. Spanish River loaded the bases right out of the gate in the first inning, but Lancers starting pitcher Jordan Santiago was able to get himself out of the jam. From that point on, it became a question of who was going to get on the scoreboard first. Both Santiago and Sharks starter Cam Weinberger were cruising.

Spanish River struck first in the fourth inning. Billy Marion brought in the first run of the game when he drew a bases-loaded walk with one out. Two batters later, Anthony Acino hit a two-run single, and the Sharks found themselves up 3-0.

Meanwhile, Weinberger continued to cruise. Those three runs would be all he needed on the night as he went the distance, allowing only five hits while not surrendering a single run.

“It was a good game,” Weinberger said. “Everyone did good defensively, I kept the ball down and my defense made some good plays for me, which was big.”

Weinberger faced 24 batters, only three more than the minimum, as he kept Lancer batters on their toes all night.

“One thing I try to do a lot is mix up the pitches,” Weinberger added. “Maybe not throw a fastball every first pitch and try and mix it up and keep them off balance.”

This type of performance is nothing new for Weinberger. A few nights earlier against Boca High, he threw a one-hitter. The difference Tuesday night was his performance resulted in a win.

“He pitched the other night against Boca High and held them to one hit and lost,” Spanish River Manager William Harvey said. “What you saw tonight is what we have come to expect out of Cam. He had that ability when he was in the ninth grade and unfortunately came up with an arm issue and set him back a little. It looks like he has found that again, and I think we are in pretty good shape.”

Spanish River added two more runs in the sixth and seven more in the seventh to put together a 12-run, 13-hit night, highlighted by Acino’s team-leading three RBIs. For Harvey, patience was the key to success at the plate. 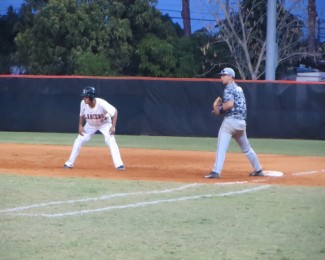 Moise Carrasco had one of John I Leonard's five hits.

“I think we walked five or six times tonight, and that’s usually not the way we do things,” Harvey said. “It’s important for us to get clutch hits, and tonight we did that.”

The win Tuesday makes things very interesting in the district race. Spanish River pulled into a tie with John I. Leonard for the coveted three seed in the district. As a result of the two sides splitting the season series and being in a deadlock in the other tiebreakers, it will now come down to a coin toss to determine who gets the three seed and the first-round bye, and who gets the four seed and will start the district tournament in the quarterfinals.

A scary situation happened in the seventh inning. With two outs, John I Leonard relief pitcher Bryan Medina took a batted ball off the face. He popped right back up, but suffered a laceration over his right eye and had to be taken out of the game. Lancers Manager Doug Magaw said after the game he had been taken to a local hospital to get stitches for the laceration.

“He was taken to the hospital but he’s a tough kid,” Macaw said. “He was like ‘I want to pitch.’ It’s unfortunate.”