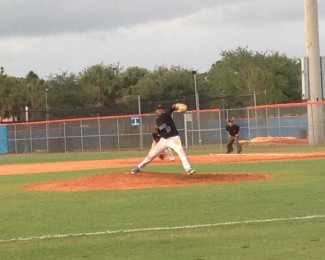 In both instances, the team that won advanced all the way to state, eventually losing in the semifinals. If history were to repeat itself, then Park Vista might as well punch its ticket to the state tournament because, just like in 2014, the Cobras went into Palm Beach Gardens and took care of business, topping the Gators 5-0 Wednesday night in the regional quarterfinals.

“It was a great game by both teams,” Park Vista Manager Larry Greenstein said. “Both pitchers really did an excellent job. We knew that Gardens is an excellent ball club. They are well-coached, so we figured lets try and score first and try and score as often as we can.”

Park Vista scored first, but it didn’t come until the third inning. For the first two innings, both team’s aces, William Guy for the Gators and Austin Smith for the Cobras, were unhittable. Both teams went three up, three down with each pitcher cruising along.

Park Vista was able to string together some hits in the third to get that first run on the board. First baseman Tyler Huggins led off the inning with a single, and designated hitter Ben Greenstein followed that up with a single of his own that got Huggins to third. Third baseman Nyle Newland laid down a well-executed sacrifice bunt to bring in Huggins, and the Cobras found themselves up on the board.

Smith continued to take care of business on his end, retiring the side in order again in the third.

Palm Beach Gardens had its first opportunity to tie things up in the fourth when Hunter Sanicky led off the inning with a single. A sacrifice bunt by Harley Sanicky and a sacrifice fly by Sendel Jean sent Hunter to third with two outs. A heads-up play by Cobras catcher Joey Genord kept the ball from getting away from him with that runner at third, and Smith induced a groundout to get out of the jam.

“That was a great block and saved a run there,” Greenstein said. “We ended up getting the hitter out, but if that ball goes to the fence, they definitely score a run. That was a tremendous job because that was not easy. It was in the dirt and he had to move to his right, and I don’t know how he did it.” 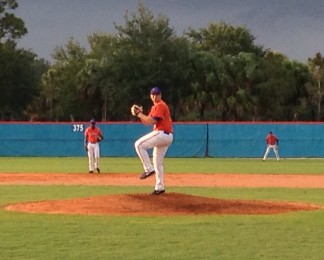 It wasn’t just the sound defense that was big for Park Vista but there ability to lay down sacrifice bunts as well. In addition to the RBI sac bunt in the third inning, two key sacrifice bunts in the sixth inning by Dakota Julylia and Colin Smith help set up the insurance run batted in by Genord.

“I’m very proud of the way our guys handled the bunting,” Greenstein said. “Maybe that’s not the usual thing for them, we don’t normally bunt in some of this spots. Colin has been on fire, but sometimes you have to play the game the way it presents itself.”

Park Vista went on to score three more runs in the top of the seventh, but with Smith pitching a complete game, two-hit shutout, those runs didn’t really factor into the final score.

“I felt pretty good out there tonight,” Smith said. “My fastball and changeup were good tonight, and my curveball came on at the end.”

Smith has been under plenty of pressure the entire season. As one of the top pitchers in the country, all eyes have been on him since day one. It’s the way that he has handled it, like his performance Wednesday night, that has impressed his coach the most.

“There’s a million scouts out here, and I know that’s a lot of pressure.” Greenstein said. “Let’s face it, June isn’t that far away, and I think he has handled it extremely well. It takes a special kid to try and stay focused amongst all of that.” 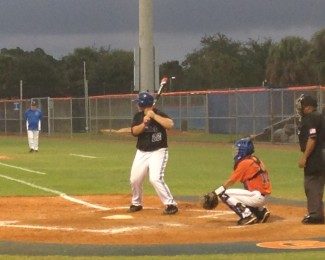 Ben Greenstein went 2-for-3 with a single, double and two RBIs.

“We’ve all talked to him, coaches, friends, family, my wife and have all told him to just go out there and have fun. There were a lot of distractions early on. When you go to pitch your first preseason game and there’s 50 scouts in the bullpen watching you warm up for a preseason game, that’s a lot of pressure on a kid.”

For the Gators, the season might not have ended quite how they would have liked, but at the end of the day, the program comes away with their third straight district title and plenty of positives from the season.

“I’m really, really proud of them,” Gators Manager Joe Russo said. “We hit a tough stretch there in the middle of the season but got off to a good start. They bounced back from that which was good to see. District champs three years in a row in this district and with this team that was probably not predicted to be as tough as we were toward the end. They worked hard, too. I know it’s a cliche, but they really did work hard.”

Park Vista now moves on to face the winner of tonight’s Jupiter-Boca Raton matchup in the regional semifinals Tuesday. That game was scheduled for Wednesday night as well, but was rained out. No matter which team wins that game, Greenstein says his guys will be ready for the challenge no matter who their next opponent is.