Berean Comes Back To Win At Atlantic Christian 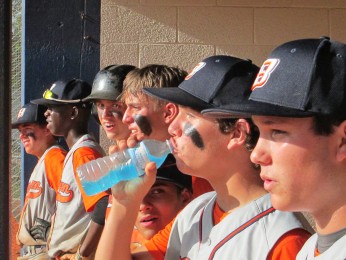 Lampblack is popular with the Berean Christian Bulldogs during day games.

The Berean Christian Bulldogs clinched the third seed in the 2A-12 playoffs Tuesday with a 6-2 victory over the host Atlantic Christian Academy Saints.

The Bulldogs scored five unearned runs in the fourth inning to decide the contest. They overcame the only earned runs of the game, scored by Atlantic Christian on consecutive, opposite-field base hits in the first inning.

The Saints were marching in the bottom of the first when, with one out, Josh Dubinsky drew a walk and was driven home on a double by George Martin. Martin scored on a hit by Logan Hollyman, who was caught trying to stretch his single by the Bulldogs’ right fielder, Jay Morgan.

Out front with a two-run lead, the Saints didn’t threaten again, but the Bulldogs had yet to bite. Berean Christian’s Armani Zalez led off the fourth with a fly ball to the outfield that fell for an error. A balk and a 6-3 fielder’s choice advanced him to third. He beat the throw home on a dribbler to third off the bat of Luke Yeargin. A single by David Hendricks and a double steal put Yeargin on third and Hendricks on second. Yeargin scored on a passed ball, sending Hendricks to third. Hendricks scored on an infield error off the bat of Jay Morgan.

A walk to Nate Hamilton and a double steal put two Bulldogs again in scoring position. Morgan and Hamilton scored on a throwing error. Saints’ starter Logan Hollyman righted the ship by picking off the runner at first and inducing a fly ball to stop the leakage.

Yeargin was not surprised by the Bulldogs’ comeback.

“We were down two,” Yeargin said. “If we can keep our heads all together and play as a team, we can win any game we want.”

The pitching performance by D.J. Lawler was a needed bit of good news for the Bulldogs. Going seven innings, the left-hander gave up two runs on two, first-inning hits. He struck out seven, walked four and plunked one batter with a wayward breaking ball. 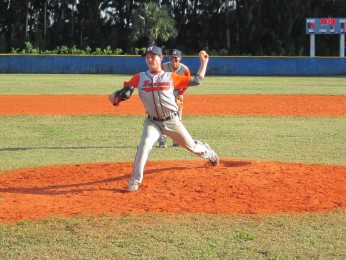 “This was our third game this week. We were really out of arms,” Bulldogs’ Manager Dave Lawler. “So we told our starter that we really needed him to run the whole game. He really came through.”

In the fifth, the Bulldogs bought some insurance when Zalez singled with one out, followed by a single by Steven Pettet. Yeargin’s sacrifice bunt advanced the runners, with Zalez scoring on a passed ball during Hendricks’ at-bat.

Of their defensive shutdown of the Saints after the first inning, the Bulldogs’ Manager had kind words for his catcher.

“Ralph Perez has been really strong behind the plate. We haven’t had a lot of stolen bases against us,” Dave Lawler said. “I think they see what he can do and they just don’t push it.”

Atlantic Christian stretches the definition of a young team. With a roster of just ten players, including three middle-schoolers and four others playing baseball for the first time, gaining experience has been paramount for the team. Fundamentals such as charging the ball, proper footwork before unleashing a throw and utilizing “soft hands” while receiving a fly ball are not yet second nature for many of the Saints. Situational-awareness and the nuances of baserunning are also to be learned. While armed with some good, natural athletes, the Saints have had to develop their fielding and hitting technique against the competition of district play.

“It’s a brand new team with just two returning players. We’re coaching and teaching the game at the same time,” Saints’ first-year Manager Clemente Orozco said. “Young minds have to go through a lot. It’s a difficult test, but we’re not afraid.”

As if to illustrate the difference in experience between the two clubs, Bulldogs’ starter D.J. Lawler spoke of three levels of technique when describing a fifth-inning pick-off of a runner at first base. 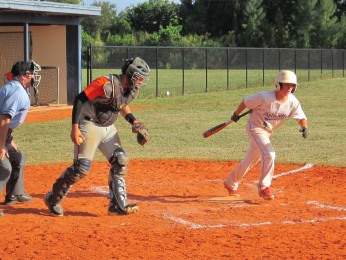 Fortunately, the Saints are blessed with “gamers” such as Josh Dubinsky, who distinguished himself Tuesday with his focus, heads-up play and hustle. Along with starting pitcher and first baseman Logan Hollyman, the Saints have some blocks with which to build. Starting in center field, picking up two walks at the plate and pitching three and two-thirds innings of one-run relief, Dubinsky was smiling while pulling no punches in review of the game.

The Saints’ Manager isn’t ruling out making some noise in the postseason.

“We’re not done yet,” Orozco said. “There’s still a big chance. The playoffs are like the season never happened, so we’ll see what happens.”

The Bulldogs’ Manager has some ideas of his own.

“It’s important to gain some momentum as we get ready for the postseason,” Dave Lawler said. “We’ve seen some teams that struggled early and they play well at the end. That’s when it matters.”

His starter echoed those sentiments.