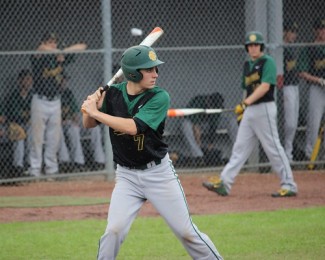 Alec Guerricabeitia had a huge first inning with a three-run triple and a two-run single.

Saturday’s Palm Beach County Game of the Week between the Suncoast Chargers and the Palm Beach Central Broncos started as a balmy and soggy affair which then turned wet, windy and a bit whacky. Rain showers seemed to start up every other half inning or so, but the inclement weather was not enough to prevent the visiting Chargers from escaping with a 12-9 victory.

“We started off hot with the bats, put ourselves in a good position,” said Suncoast Manager Brook Cross. “But when it’s all said and done, we’re lucky to get out of here with a win.”

The Chargers (5-3) plated nine runs in their first at-bats while bringing 14 hitters to the plate. They then added three more runs in the fourth inning, before allowing the Broncos to get back in range by giving up three runs each in the third, fourth and fifth.

Alec Guerricabeitia was instrumental in Suncoast’s big first inning, coming to the plate twice and driving in five runs. After the the first three batters of the game reached via a hit batsman, an error and a walk, Guerricabeitia stepped up for the first time with the bases loaded. He roped a liner down the first base line and it continued to roll into the right field corner for a bases-clearing triple and 3-0 lead. Guerricabeitia eventually scored on a passed ball during a walk to Tyler Frye.

Later in the frame, Alex Drew and Casey Goldenberg both drew bases-loaded walks make it 6-0. Guerricabeitia once again stepped to the plate with the bases loaded. This time he lined one to the other side of the diamond to drive in two runs and give the Chargers a commanding 9-0 lead.

“I’ve been in a slump recently, so I was just trying to get myself out of it and do the basics right,” said Guerricabeitia. “It all just happened to play out right for me.”

After Suncoast starter Liam Lyons hung two zeros and held them hitless in his first two innings, the Broncos could have easily given up on the game. Even more discouraging may have been the miraculous catch Chargers short stop Nathaniel Brodsky made against them in the second. A ball off the bat of Hunter Gunn looked destined to drop into left field for a hit. But Brodsky, seeing that his outfielder would not be able to get to it, raced back and made a leaping, twisting, over-the-shoulder basket catch reminiscent of the great Willie Mays.

“I had the opportunity and I got it,” recalled Brodsky. “I was running back and then, once I saw the outfielder, he wasn’t coming, I just looked up and I saw the ball.” 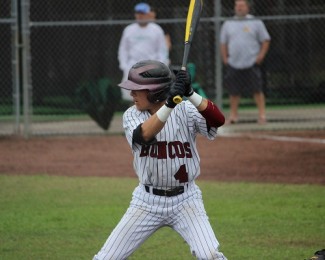 Joey Romano lead the Broncos comeback charge, batting 3-for-4 with and RBI and three runs scored.

Despite a play that seemed to indicate that the baseball gods were not on their side, the Broncos continued to battle, and in the third they finally had a breakthrough. Central left fielder Joey Romano started the inning with a bloop single into left field. Brad Zippin moved him to second with a hard grounder down the third-base line for a base hit, and then Connor Power drew a walk to load the bases.

At that point, Cross pulled Lyons and went with a pitcher-by-committee approach for the rest of the game. In the next at-bat, Brett Hoberman took the first pitch he saw into right field to drive in Romano and get the Broncos on the board. Brandon Whelan tacked on another run with a single into left field, and that is when the wackiness set in.

With a steady but light rain falling, Hunter Gunn lobbed a ball into shallow center field, causing all of the Bronco runners to hold at their base. Drew charged in to make the play for Suncoast but was unable to come up with the catch, putting the runners in motion. Drew’s throw to second was too late to nab Whelan and the ensuing throw to third hit Hoberman in the back, ensuring that the Broncos were safe all around, including Power at the plate to cut the lead to 9-3.

“The positive was the fact that we scored some runs,” said Broncos manager Scott Benedict. “But, we have to tie it all together. We had two bad innings with pitching and defense. Give Suncoast credit, they came out ready to score, and you can lose it in the first inning just like you can lose it in the ninth inning.”

The Chargers got all three runs back in the fourth. Frye and Jack Virden each had a base hit and came home on sacrifice fly’s by Drew and Brodsky. For Drew, it was his second RBI of the afternoon despite not yet recording a hit. Daniel Hein also scored on a wild pitch.

Romano once again got things started for Central in the fourth by beating out a ground ball to second for a one-out single. A.J Gallicchio followed with another base hit and then a double by Zippin moved him to third and brought in Romano. Gallicchio scored on a wild pitch and Zippin crossed home on a sac fly by Power, making it 12-6.

The Broncos pulled within range by adding yet another three runs in their next at-bats. Gunn and his brother Daulton scored on RBIs by Brendon Lauer and Romano, and Power chalked up his second RBI by driving in Romano on a groundout to third. Romano had a 3-for-4 afternoon with three runs and an RBI. 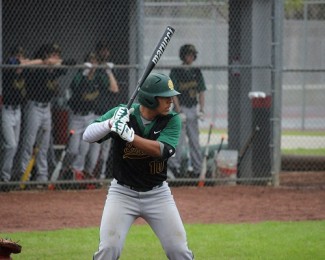 Two was a lucky number for Tyler Frye, who went 2-for-2 with two walks and two runs scored

“I wouldn’t say panic, but we had to wake them up a little in the fifth and sixth. I think we got a little lackadaisical after that big first inning,” Cross said. “Those guys, I give them all the credit, they battled back and stayed in it when it would have been easy for them to throw in the towel.”

In order to ensure the win, Cross turned to his staff ace, Tyler Lavery, in the seventh. The sophomore pitcher responded by shutting down the top of the Bronco’s order to earn the save.

The loss drops Central to 2-8 on the season. But if the team can maintain the same resolve they showed on Saturday they may yet find themselves in the midst of the district 8A-9 race.

“It was good to see us manufacture some runs,” Benedict said. “But for us to get out of this funk we’re going to have to get pitching, defense and hitting all working together.”