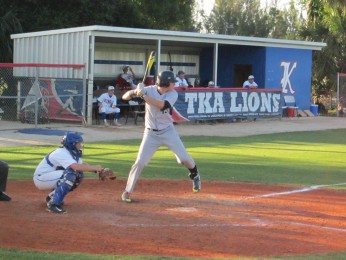 In a crisply played, error-free contest Monday night at The King’s Academy, American Heritage-Delray scored the only runs of the game off one swing of the bat in its 3-0 victory over the Lions. A two-out single opened the barn door for the Stallions, and a clutch double by clean-up hitter Hunter Bowling spooked a three-run stampede that decided the game.

“It was a clutch hit there by Hunt; he came through,” said Mazza. “Hunter’s there for a reason. Those situations come up where we get some guys on and the opposition’s gonna do the right thing and walk Jon India, and we’ve got to capitalize. We did today.”

The winning rally came after Lions’ starter Bobby Biskupiak retired the Stallions’ eighth and ninth hitters leading off the fifth inning. The top of the Stallions’ order came out swinging. Tyler Frank laced a line drive down the left field line, where a hustling play by Ryan Arendas held Frank to a single. Chris Canavan then doubled to the left-center gap, with Frank stopping at third, and an intentional walk to Jonathan India loaded the bases. Bowling unloaded on a pitch, sending it deep into the same left-center gap. Running with two outs, all three base runners came home to break the scoreless deadlock.

An aggressive approach paid off for the Stallions, as two of the three hits in the inning came on first-pitch swings.

“I hit a fastball after a first-pitch curveball in the dirt,” said Bowling. “I was looking for a fastball to drive it and that’s exactly what I did. This is the best group of guys I’ve ever played with. They go out and compete every game.”

The Stallions looked prime to score in the fourth after a walk to Bowling and a long single by Brendan Brundage put runners on the corners with no outs. Nate Zuckerman turned on a fastball, scorching a knee high liner inside the third base line. A dive by third baseman Colin Valente netted the drive and a second lunge to tag third base ahead of the returning runner completed an unassisted double play.

Several outstanding defensive plays by the Lions kept the Stallions from mounting additional rallies. With two out and runners on first and third in the first inning, second baseman Dylan Costa extended himself horizontally, knocking down a one-hopper in the hole and throwing the runner out at first to end the threat. Center fielder Andrew Goodlet made a diving catch of a Texas League fly ball to rob Zuckerman in the second inning. In the third, Goodlet showed off his range by chasing down a deep drive hit over his head by Canavan. 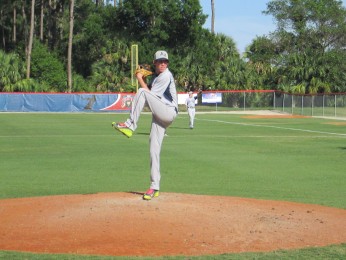 The Stallions’ final charge came in the sixth when Michael Malinchak doubled, and then stole third on ball four to Frank. A Valente to James Vaughan 5-3 put-out held the Stallions in check. Vaughan was fortunate to still be in the game after two, high speed collisions with base runners at first base tested his fortitude.

The Lions, with four hits, could not find the timely knock that might have put some runs on the board. In the first, a one-out single by Austin Sharkey was followed by a ground ball that turned into a slickly turned 4-6-3, Frank ,to India to Bowling double play.

In the third, Costa was caught on the ankle by a pitch and, after an extended time out, remained in the game. He reached scoring position on a wild pitch but the inning ended on a ground ball to short. After the game, Costa was headed for X-rays to make sure no bone was broken.

The Lions’ best chance came with two outs in the fifth inning. Consecutive singles by Zach Krance and Ben Lobello followed by a stolen base by Lobello put two Lions in scoring position. A well struck grounder was snagged by pitcher Dylan Gordon, whose throw to first put out the fire.

“I felt really in command of all my pitches today. My fastball felt good, and my slider was pretty much my strike-out pitch,” said Gordon. “My ‘velo’ was definitely up there and I felt really dominant tonight.”

Sidewinder Zach Schneider notched a save in two innings of scoreless relief, with one hit and three walks.

The King’s Academy Manager Brad Wilkerson saw some positives even after the loss.

“You’ve got to give Bowling a lot of credit. He came up with the big hit,” said Wlkerson. “I’m just happy our pitchers went out pounding the strike zone. They weren’t scared. One hit beat us. We’re struggling a bit with the bats but, hopefully tomorrow’s a new day.”