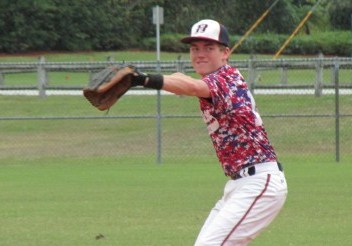 Junior second baseman Noah Adams is expected to be one of leaders at Berean Christian.

Noah Adams, DJ Lawler and Ralph Perez have been teammates at Berean Christian since they were in the seventh grade. Now juniors, they have grown up together, and so has the Bulldogs program.

Adams will play second base and is the No. 2 pitcher.

“There’s definitely been a lot of improvement since seventh grade,” said Adams, who batted .365 (19-for-52) and was 3-4 with 35 strikeouts in 27 innings last season. “This is a close-knit team. We go fishing and skateboarding together, we’re in each others classes.”

Perez is the starting catcher although he might also see action at third or as a reliever.

“The biggest change is the way we think about baseball,” said the 6-foot Perez. “I used to think it was just a game. Now I want to prosper and go far. I’m excited for the season. We want to finish stronger and go farther.”

Another key returning player is freshman Armani Zalez, a left-hander, who will see significant time in centerfield while also playing some first base and pitching. He batted .275 and started once in eight appearances. Sophomore David Hendricks has also been part of the core group, having been with the program since he was in sixth grade. Hendricks, who batted .321 last season, is expected to play third base or the outfield.

A newcomer who is expected to make an immediate impact is junior Nate Hamilton, who played for Jupiter the last two seasons. He is expected to start at shortstop and add depth to the pitching staff. 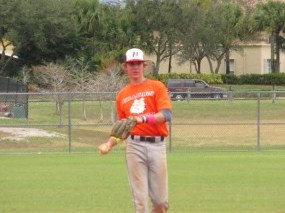 “We’re together a lot, and we have good chemistry,” said Hamilton, who is home-schooled. “We have to play as a team and execute. I have confidence we can win games.”

The Bulldogs are a young team, without any impact seniors, according to Manager Dave Lawler. They should begin the season with 12-15 players. But the core group have seen a lot and been through the ups and downs.

“You always like to have more depth, but we’ve got what we got,” said Lawler, whose team will play home games at a new site this season at Seminole Palms Park in Royal Palm Beach.

Adams helps anchor a solid, experienced infield whose players will provide much of the team’s leadership.

“The strength of the team is that we know each other,” said Adams. “We have a good team that can hit for contact, we don’t strike out a lot, especially at the top of the order.”

Lawler realizes the Bulldogs are underdogs in their district and he’s OK with that. Berean Christian lost twice by three runs each time to Atlantic Christian last season and then watched them make a deep run in the playoffs.

“When our guys saw what they did, we were proud of them and it gave us some hope for this year,” added Lawler. 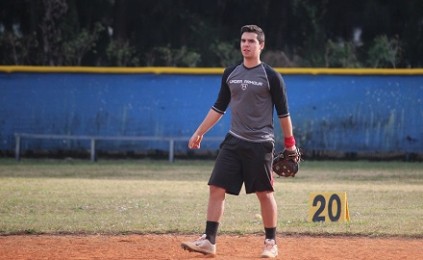 George Martizez is the only senior on a very young Atlantic Christian squad.

Last season was a bit magical for Atlantic Christian Academy. In their first year of existence, there was a question as to whether the Saints would even be able to field a varsity team. Eventually, they were able to scrape together enough players and, not only did they field a team, they came within one run of making it to the state tournament.

Under first year manager Ariel Gonzales, the Saints surprised everyone by winning their first four games of the season. They proceeded to drop their next three but rebounded to finish the campaign with a 12-9 mark. They were defeated by Glades Day in the district 2A-12 final, but again rebounded, winning two straight to wind up in the regional final versus Seacrest Country Day. They led that game by a score of 6-3 going into the bottom half of the final frame before being victimized by a four-run rally by the opposing Stingrays.

All but one of the starters from that club, as well as the Manager, are no longer with the team and now the Saints are right back where they started from. The new squad is comprised primarily of youngsters that will be making their first foray into varsity level baseball, leaving Carlos Rodriguez as sole hold-over from a year ago.

Leading them will be first time manager Clemente Orozco who grew up in baseball-centric Cartagena, Columbia. After playing college ball, Orozco put baseball behind him until his son, Clemente Jr., opted to concentrate on baseball instead of soccer. At the time, Clemente Jr. was only four years old but showed tremendous potential. Orozco took him under his wing and nurtured his talent and over the years his son blossomed into a quality player. When he was offered the position as head man at Atlantic Christian, he initially declined until his wife and daughter convinced him that it was a blessing from God and now he hopes his influence can stretch beyond the field.

“My philosophy is to work with these boys,” said Orozco Sr. “Be a mentor, you know, show what I’ve got inside, not only for the game, but my beliefs. That’s the most important thing for us.”

He knows that the task on the field will not be an easy one though, and is realistic about the expectations.

“This is a team for the future,” said Orazco Sr. “This year, one thing that we’re not going to pay much attention to is results, you know, concentrate more on working with these boys and building the team.”

He readily admits that the roster looks more like that of a JV team, with only one senior and the rest being sophomores or younger. He hopes to add a few older players from the school’s basketball team once their season is over but was unwilling to commit them to his roster.

The lone senior on the team, George Martinez, is starting to see the results of that work and is cautiously optimistic about the upcoming season.

“It’s good,” Martinez said about the team’s practices. “It’s a young team so, you know, we’re getting better.”

Rodriguez, the only returning starter, admitted that things have been strange without all of his old teammates around, but believes that the new bunch has the ability to be even better.

“We’re young,” Rodriguez reiterated, “but I think we have a good chance this year.”

Putting together another winning season with such a raw group of boys would be akin to lightning striking twice. Orozco Sr. is not counting on it, but he certainly is not ruling it out, either.

“This is a developing team, but we are expecting good things,” he said. “When you’ve got God on your side, everything can happen, you know what I mean.”