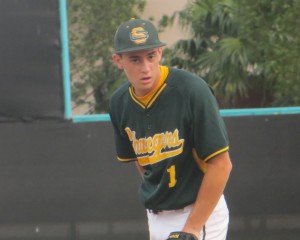 The Suncoast Chargers made the long trip to Broward to take on powerhouse Archbishop McCarthy, which is going for its fifth consecutive state title. Though the Chargers fell short, they gave it their all in their final game of the season.

Senior left-hander Brian Gonzalez struck out 13 en route to his first career no-hitter, and Dylan Bautista drove in three runs as the Mavericks defeated Suncoast 4-0 in their 5A regional quarterfinal Wednesday night.

“He was very dominant tonight,” said Mavericks Manager Rich Bielski. “He did what he had to do and worked so hard. I’m absolutely happy with this win. There’s a lot of teams that lost tonight and won’t get to play next week.”

Gonzalez was pitching in front of Jim Morris, the Miami coach who he might play for next season if he doesn’t go pro, and showed why the Hurricanes would love to have him. The big man threw his high-80s fastball for plenty of swinging strikes and mixed in a solid curve and change-up to keep the Chargers’ hitters honest.

The only real threat to his no-no came in the top of the seventh when Liam Lyons hit by far the hardest ball of the night off Gonzalez to deep right-center. But as he’s done in the past, center fielder Michael Gigliotti was there to lay out and make a tremendous diving catch.

“As soon as he hit it, I turned around and saw Giggy got a good jump and I was like ‘he got it.’. He’s so amazing out there,” said Gonzalez of his speedy teammate. “I just had a good feel for my pitches tonight.”

It was a good thing Gonzalez was on his game, as the Suncoast pitching lived up to its own lofty billing by holding the potent Mavericks offense to only five hits on the night. Starter Casey Goldenberg went four innings, and while his control was a little lacking in spots, he used his live fastball to good effect, limiting McCarthy to just a couple of hard-hit balls. If two grounders by Bautista had been even a foot to the right, the game could have been a much different story. 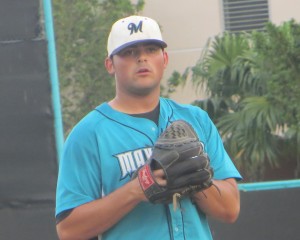 Brian Gonzalez struck out 13 during his no-hitter.

Chargers reliever Chaz Kaps was also impressive, as he used three quality pitches to prevent the Mavericks from getting a single hit in the final two innings. Kaps’ ERA was a meager 1.97 during the regular season, and he showed why on Wednesday.

The damage from the Mavericks (26-2) came in the second and third innings. In the second, Alex Toral led off with a deep opposite-field double to left center, and then scored along with Alex Rodriguez on a single by Bautista that just sneaked under the second baseman’s glove.

In the next inning, Gonzalez was hit by a pitch, stole second, and then moved to third on an Aaron Soto single to left. A sacrifice fly from Ryan Sinzenich that featured a great catch by center fielder Calvin Page scored Gonzalez. Bautista followed with his second hit of the game, driving in a run.

The Chargers (15-10) tried their best to get to Gonzalez, but the only time they managed to get more than one base-runner on was in the sixth, when Daniel Hein walked and Michael Ali reached on an error. It wasn’t to be, however, as the Mavericks picked up their 15th shutout of the season.

“That’s a great pitcher they’ve got,” said Chargers Manager Brook Cross said. “We’ve struggled with the bats here and there throughout the season but we battled all the way to the end tonight. We return 12 players next year, so this should be a good learning experience and I look forward to having a veteran squad next season.”

Archbishop will host 5A-16 runners-up Cardinal Gibbons in Tuesday’s semifinals. The Mavericks won both meetings in the regular season by scores of 10-0 and 1-0 before edging the Chiefs in the title game, 3-0.

“Gibbons is another club with good pitching that is very well coached,” Bielski said of his familiar next opponents. “We have a good week ahead of us and we’re looking forward to preparing for them.”