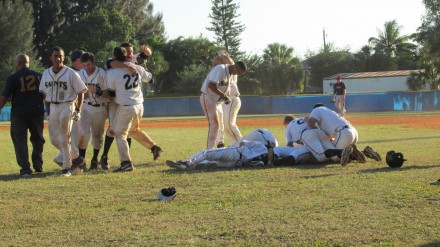 Atlantic Christian players celebrate their 4-3 triumph over Master’s Academy in the Class 2A regional semifinals.

The uncertainty of whether Atlantic Christian was going to play baseball this year is long over. But their season isn’t.

The Saints’ amazing journey continued with their emotional 4-3 victory over Master’s Academy of Vero Beach in 10 innings Tuesday afternoon in the Class 2A regional semifinals.

Atlantic Christian (12-8) plays the winner of the Sarasota Christian and Seacrest Country Day game in the regional final Tuesday.

The game featured numerous peaks and valleys that exploded like Mount Vesuvius when Carlos Rodriguez scored the winning run with two outs in the bottom of the 10th. Players leaped for joy, hugging each other and then enjoyed a team dogpile in front of their dugout.

“Oh my goodness, I’m super exhausted,” said Atlantic Christian first-year Manager Ariel Gonzalez. “I can’t explain the feeling. I was so up and down emotionally, but I was trying to keep myself under control emotionally from going crazy, trying to stay under control for the guys. I’m just so excited for them. They deserved it. They worked so hard all year. We never expected to get this far this year. We’re just excited, we’re just running with it.”

Atlantic Christian, which defeated Merritt Island Christian 4-0 in the regional quarterfinals, needed to rally from a 3-0 deficit to force extra innings.

With two outs in the 10th, Rodriguez walked on a 3-1 pitch and moved to second on Petru De La Garza’s single to right. Chris Perez struck out, but the ball bounced past the catcher and he beat the throw to first to load the bases for sophomore Ronald Ramadan.

During a conference on the mound, Ramadan, who had struck out in his two previous at-bats, talked strategy with Gonzalez.

“He told me this was my at-bat, to relax, watch for the fastball. But he threw me a curveball and instead of going the other way, I just pulled it,” said Ramadan.

The ball went through the shortstop’s legs, sending the Saints to the regional final.

“People were saying we weren’t going to have a baseball team and we proved them wrong and we came this far,” said Ramadan. 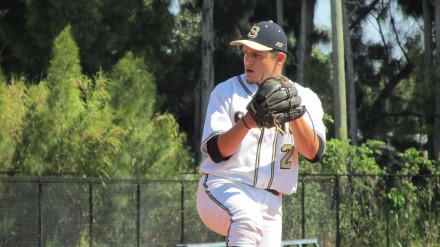 Part of the reason the Saints got this far is the pitching of De La Garza, a senior left-hander who struck out 15 in the regional quarterfinals.

Against Master’s Academy, De La Garza struggled early, giving up three runs in the first two innings. But he settled down and went nine innings, striking out 15, walking two and allowing nine hits while throwing 156 pitches.

“Petru has been our horse all year, he’s been incredible,” said Gonzalez. “I don’t know what it is. He’s just a warrior when he’s out there.”

Gonzalez was pleased that De La Garza did not let being behind 3-0 get to him. Gonzalez wanted to pull him from the game sooner but got talked out of it.

“After that last inning (the ninth), I told him no more, you have to come out,” said Gonzalez. “He has a long career ahead of him.”

De La Garza, who moved to center field for the final inning, did not show any ill effects after the game.

“I can throw another nine,” said De La Garza. “I was out there in the sixth, seventh, eighth, I was in a groove. I had my team behind me, I had their support, the crowd. It was a great feeling. I’m not exhausted.”

De La Garza admitted his pitch count got a little out of hand.

“Coach had to pull the plug and I was disappointed, but I had confidence in the rest of my team to pull through,” said De La Garza, who wants to play baseball at a junior college in Florida.

In the ninth inning, Master’s almost took the lead against De La Garza, loading the bases with one out. But the southpaw struck out the next two batters to end the threat. 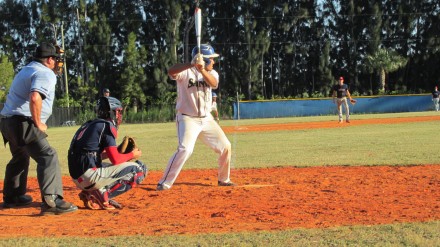 Ronald Ramadan’s grounder provided the winning run in the bottom of the 10th inning for Atlantic Christian.

Master’s almost took the lead in the 10th inning as well, putting runners on first and third with two outs. Mason Smith’s blooper into short left field looked like it would fall when Ramadan made a spectacular diving catch to end the inning.

De La Garza led the Saints with three hits, while Perez added two hits and a walk. Ramadan also had an RBI forceout in the fourth.

“God is good,” said De La Garza. “We really came together at the end of the season. I hear it all the time that going into the playoffs, it’s not the best team, it’s the hottest team. We’re so humble as a team, we accept each other and have good team chemistry.”