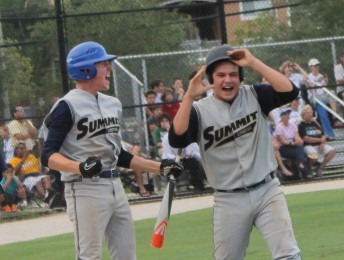 THe Saints celebrate after coming back to take the lead in the top of the seventh inning.

All season long the Atlantic Christian baseball team has benefitted from a little bit of magic to help keep them alive in games. On Tuesday afternoon the Saints again found that same recipe, only to watch as their opponents responded back with some magic of their own.

Atlantic Christian rallied for the lead in the top of the seventh, but then watched in dismay as host Seacrest Country Day answered back to walk off with a 7-6 victory in a Class 2A regional final played in Naples. The Stingrays (20-8) scored four runs in the bottom of the seventh inning to erase a big deficit and earn a spot in next week’s Class 2A state Final Four.

After an emotional and challenging road had also been paved with plenty of luck and lots of heart, the Saints (12-9) were unable to hold off one final furious rally from the Country Day offense. The team had come a long way from the start of the season, where the program was unsure if it would even be able to field a team. Then the club capitalized on every opportunity to make a deep playoff run, including a thrilling extra-inning victory in the final inning of its regional semifinal at Master’s Academy.

Very few had ever believed that a young new group of players playing under a brand new young Manager could ever accomplish what they did. Even while the sting of the loss was still fresh on the day, Saints first-year Manager Ariel Gonzalez could not help and relish all that his group of guys had accomplished both on and off the field this year.

“This ride was incredible,” said Gonzalez. “We were so blessed to be here as a team. Yeah, it’s upsetting that we came up short, but they were the better team tonight. We had five errors, and it’s hard to win games when you have five errors. We still had a chance to win. This was the third close game that we fought back and the other three we actually came back winning. This one, they got the best of us. Things have been going our way all season and we can’t win them all.”

Even despite the miscues, the Saints were able to overcome and put themselves in position for the victory. The Stingrays took a 3-2 lead in the bottom of the sixth inning, and Atlantic Christian answered right back for one last magical moment on the season. Down to their final out, they made their final push to chase after the victory.

Carlos Rodriguez started the rally by lining a 1-1 offering into left field for a single. Petru De La Garza then pushed the tying run to third base when he blasted a shot off the left field fence for a double. Chris Perez followed by putting the ball in play to the infield defense, and an error allowed him to reach safely and also plate Rodriguez with the tying score. The Stingrays elected to intentionally walk Ronald Ramadan to load the bags and set up a force play, and Mark Hunterburg made them regret that decision when he reached base on a throwing error that cleared the bases to give Atlantic Christian a 6-3 advantage. 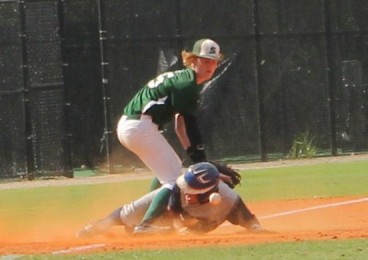 Ronald Ramadan slides into third base with a triple in the fourth.

It was the third time in the contest that the Saints had answered back after Seacrest Country Day scored. The Stingrays scored an unearned run in the bottom of the first, only to allow Ramadan to even things up by scoring on an error in the top of the second. The home team jumped back on top in the third, and Ramadan responded by scorching a triple with one out in the fourth and then scoring on an RBI single from Hunterburg.

The way things had gone all season long, the Saints never doubted they could come back whenever they fell behind. They simply did not have that opportunity the final time through.

“It happens and it’s the game of baseball,” said Gonzalez. “We just hope that we can come back next year stronger from this. We hope the guys can grow and get better from all of this. But this has been an incredible year. If we wouldn’t have won another game after today it still has been a blessing to be a part of this, what we have experienced as a team.”