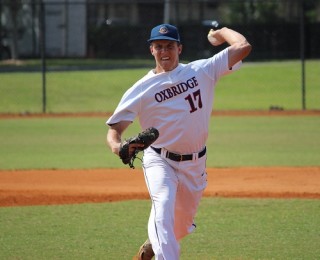 Ben McGrath starred on the mound and at the plate for Oxbridge.

2014 has been the first season of district competition for Oxbridge and Atlantic Christian Academies. For both, it has been a relatively successful campaign. Going into Monday afternoon’s match-up, the Thunderwolves of Oxbridge were 8-9 on the season (1-5, 3A-14) while the Saints of Atlantic Christian were 8-4.

Back in late February, things did not look quite so promising for Oxbridge however. They had gotten off to a 2-5 start before putting together three straight wins to reach .500. In the middle of that streak, they handed the Saints one of their worst losses of the season, beating them by a score of 13-1. When they faced off for the second time on Monday afternoon, the Thunderwolves were once again looking to break even on the season and also to prove that their performance earlier in the season was no fluke.

Oxbridge started strong and never looked back. They took advantage of two RBIs from Jonathan Prokos and one from David Carnicella to score five runs in the first inning while batting around the order. Throughout the day, they showed great plate discipline, taking advantage of nine free passes while also racking up eight hits en route to a 12-2 win.

Ben McGrath was instrumental in the first meeting, earning the win as the starting pitcher for the Thunderwolves while also going a perfect 4-for-4 at the plate with two long balls and five RBIs. On Monday, he was once again a force to be reckoned with. On a 45 pitch limit, he tossed three hit-less innings for Oxbridge, the only blemish on his line being a base on balls issued to the second batter he faced. He fanned two batters in the second inning and struck out the side in order in the third before moving to center-field in the fourth.

“Really try to get ahead of hitters,” McGrath said of his strategy. “Locate and use my off-speed stuff. That’s really the game plan.”

At the plate, he tallied a hit in each of his first two at-bats, including a solo home run in the second inning.

“I really just tried to stay up the middle of the field and have a nice, balanced swing,” McGrath commented on his fifth homer of the season. “He just left a pitch middle-in and I put a good swing on it.”

He drew a walk in his two subsequent plate appearances and finished the game having stolen a base and scored three runs.

“It feels good to be able to contribute to our team,” said McGrath, the only senior to take the field for the young Oxbridge squad. “I think we’re doing a good job heading into district play and I’m looking forward to the next couple of games.”

His home run kicked off a three-run second inning. Tarik Latchmansingh followed up with a walk and eventually scored on a passed ball. Adriano Oberndorfer later doubled and came around on Carnicello’s second RBI of the day. 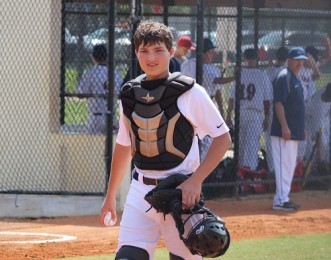 Jonathan Prokos hit a two-run single in the first inning.

Down 8-0 in the top of the fourth inning, the Saints kept battling. Petru De La Garza scored when Chris Perez grounded out to shortstop to get Atlantic on the board. Mark Hunterberg then singled into right-field to bring Ronald Ramadan around for the second run of the inning. Hunterberg stole second base and advanced to third on a sacrifice bunt before Tyler Levin, who came on in relief of McGrath for the Thunderwolves, induced a ground out to end the inning.

McGrath scored his third run of the day when he walked in the bottom half of the inning. He took second on a throwing error, third on a passed ball and finally scored on another passed ball.

The Thunderwolves added two more un-earned runs in the fifth to go up 11-2. Levin’s sacrifice fly in the sixth inning brought home Aaron Sadow to expand the lead to ten and end the game via the mercy rule.

“It just wasn’t our day today,” said Saint’s Manager Ariel Gonzalez. “Sometimes you just have those games and you just have to battle and hopefully we can get better.”

The loss drops the Saints to 8-5 with just three games remaining on their regular season schedule. None of those games are against district opponents and they remain in second place in 2A-12 with a 5-2 mark.

Oxbridge has just two games remaining and their Manager Juan Bustabad is hopeful that they’ll be able to finish over .500.

“We finally got to .500 and we have such a young team,” Coach Bustabad said, pointing out that five members of Monday’s starting line-up were freshmen. “The future looks good for Oxbridge, and all we’re doing is trying to get them more experience. Just getting the experience at varsity baseball which is going to help us when the become juniors and seniors.”