Bates, Mercurio Save King’s In 2-1 Win Over Suncoast 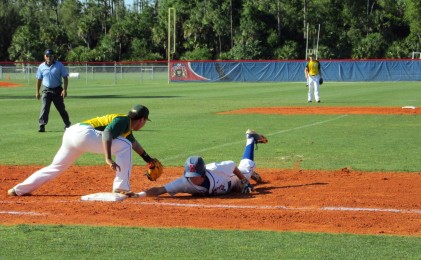 Shortstop Nick Bates used his goalie skills to save a game for the King’s Academy baseball team.

With the bases loaded in the seventh inning, Bates made a diving catch on Alec Guerricabeitia’s soft liner to end the game and clinch the Lions’ 2-1 triumph over Suncoast in a non-district contest Tuesday afternoon. Bates was the Lions’ starting goalie on the soccer team for most of his career, and those skills re-emerged when he needed them again for his other Lions squad.

“I’m thinking that’s a hit, I’m thinking it’s dropping,” said Suncoast Manager Brook Cross. “Their shortstop made a great play. That’s kind of what I told our guys. In a game like this, it’s who wants it more. He made a great effort play and that was the difference in the game.”

Bates began the game at second base and came in to pitch in the fifth inning, before moving to shortstop when Dominic Mercurio started the seventh.

“As a goalkeeper, diving is pretty natural, that’s basically what you do every day,” said Bates, a senior who plans to attend Concordia College in Irvine, California. “It’s just natural to go and dive and make the play. It’s just nice to be able to come out and win the close games because we know we’re going to be in some more. So when we can get these wins by one or two runs, it’s a good morale boost.”

Bates takes reps at both second and shortstop and said he wasn’t too nervous in the seventh inning.

“We knew if he could reach it, it was gonna get caught,” said King’s Academy Manager Doug Magaw. “That’s just what he does. He’s unbelievable like that.”

Suncoast threatened to tie the game in the top of the seventh inning against Mercurio, who struggled but didn’t panic. Calvin Page reached first on a one-out error, and moved to second on Daniel Hein’s blooper to left on a slow curve. It was the Chargers’ first hit of the game.

Mercurio bounced back with a strikeout, but walked Jordi Sallent on a 3-2 pitch to load the bases. After a conference on the mound, Mercurio induced Alec Guerricabeitia into a soft liner on an 0-1 pitch that Bates’ snagged while diving toward third base.

King’s Academy (11-8) used five pitchers, who combined to allow just one hit while striking out seven and walking five. Bates, the fourth pitcher, got credit for the win, while Mercurio earned the save.

Using the five pitchers was all part of the plan because the Lions were only playing two games this week, including a key district game against Pope John Paul II on Friday. King’s is second in 4A-13 at 4-2 and Pope is tied for third at 3-3. They both trail American Heritage-Delray (5-0). 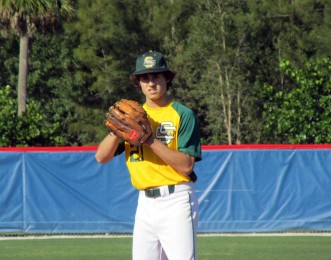 “They all needed work and Friday is Pope, so we wanted to get them all live work,” said Magaw. “It’s a gamble but we look at non-district games where we’re trying to get work in, so we want to focus on doing well in district games.”

The Lions manufactured a 1-0 lead in the fourth inning. Mercurio led off with a single and stopped at third on James Vaughan’s double down the left field line. Ryan Johnson was intentionally walked and Sean Hart’s grounder to third scored Mercurio.

The Chargers (10-6) tied the game in the fifth inning without the benefit of a hit. Calvin Page reached second on a two-base error on a deep fly to the outfield warning track. Daniel Hein walked and Page scored on an errant pickoff throw.

King’s took the lead in the sixth. Connor Hart led off with a line drive single to left and was bunted to second by Mercurio. He moved to third on Vaughan’s flyout to right and scored easily on Johnson’s double to the fence in left-center.

Cross was only planning to use his starter, senior right-hander Will Engel, for three innings or about 30 pitches.

“After I saw those first couple of innings, the way we were swinging the bats, I knew it was going to be more of a defensive game and I needed to leave him in there to have a shot,” Cross said. “Defensively, we played well; we just couldn’t get the bats going.”

Suncoast has only scored four runs in its last three losses and Cross told his team they have to play their best as the season winds down. But he was extremely pleased with Engel’s effort, which included four strikeouts, one walk and one hit batter while scattering six hits.

“He pitched a great game,” Cross said. “I feel good when he’s on the mound.”

Magaw was impressed with Engel as well.

“That kid is legit,” Magaw said. “He’s got unbelievable command. We were just fortunate to get what we got.”