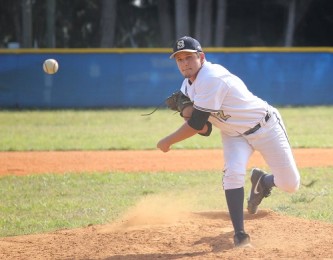 Atlantic Christian Academy used Friday afternoon’s home game against St. Andrew’s Scots to pay tribute to its senior ballplayers. The seniors then repaid the favor by leading the Saints to a 2-0 victory, improving their record to (8-4, 5-2) and keeping them within striking distance of first place Glades Day.

Petru De La Garza was the catalyst for the Saint’s win, pitching a complete game shut-out. Relying on a lethal fastball-curveball combination, he baffled St Andrew’s batters all day long, allowing only two hits and striking out 12.

“I just wanted to come out here and do this for my team,” De La Garza said with a smile.

In the off-season, there was some question as to whether or not the newly founded Atlantic Christian Academy would be able to field a team. Of the 14 players on their roster, De La Garza is one of the few that is what manager Ariel Gonzales calls a “baseball guy,” and he has become a true leader for the inexperienced bunch.

“It’s Senior Day and we have a lot of new kids, but I’m glad we could pull through,” De La Garza continued. “It was a great day for us. I’m just happy for our seniors. They worked hard from where we were at the beginning of the season.”

On the other end of the spectrum from De La Garza is the Saint’s second baseman, Noah Aterburn. Although a senior, he had not played organized baseball since he was in fifth grade.

“There was definitely a learning curve starting back up,” Aterburn admitted. “All these guys, I was little bit behind.”

On Friday, he caught up, having a perfect 3-for-3 day at the plate with a double and a run scored.

“It feels awesome,” he said about his performance. “I was seeing it well today and we worked this whole week on just staying calm, staying back and just waiting for it. I think that’s what payed off today.”

While Atlantic trotted out all seniors, the Scots did not have a single one in their lineup. In fact, manager Rich Mahon fielded a group that consisted of three eighth-graders and two freshman. Of those, perhaps none was more impressive than freshman hurler Scott Gellman.

Gellman held his own all day against De La Garza, pitching a complete game of his own and striking out eight Saints in the process.

“Scott Gellman, he showed some moxie today on the mound,” raved Mahon. “He did well. He hadn’t thrown in a while but he came out, was throwing strikes, was doing some things.”

One of his best moments came in the second inning. After Aterburn led off the frame with his double, Gellman clamped down and struck out the next three batters to stand him.

The only time he really faltered was in the fourth when he allowed another lead-off double, this time to Ronald Ramadan. Aterburn followed with his second hit of the night and, with runners on the corners, Nathan Ho managed to drop a blooper into shallow right-field for an RBI and a 1-0 lead. Craig Fashaw beat out the throw on an attempted sacrifice bunt in the next at-bat to load the bases with none out. Gellman notched two clutch strikeouts before the long inning finally seemed to get to him. With the bases still loaded, he walked Carlos Rodriguez on four pitches to bring around Aterburn and run the score to 2-0.

Both Ho and Fashaw are first year baseball players and Ho found some unlikely inspiration for his RBI.

“I just came up and wanted to be aggressive,” he recalled. “Then my song came on,” he continued in reference to his walk-up music, a special feature of Senior Day. “It just happened. I got in my mood and just swung.”

Fashaw is just happy to be a part of the team.

“I put in the yearbook that it would be cool if I could play baseball one season of my high school career,” he said when asked about what this season has meant to him. “This year, I was provided with the opportunity to play and it’s been a blessing.”

Once he received the necessary run-support, De La Garza took over. He faced the minimum through the next three innings despite allowing his second hit of the night. Scot Richie Rocca led off the sixth with a single but was erased when the next batter struck out and was called for interference while Rocca tried to steal second.

Jordan Spitzberg looked to start a rally in the seventh when he lined the second pitch of the inning towards second base. Aterburn, already an offensive star, also made the defensive play of the day, diving to his left to make the grab in support of his pitcher.

“As soon as it came off the bat, I knew it was coming my way,” Aterburn said of his heroics. “I wasn’t sure if it would be too far or not so I tried to judge. Once I realized I would have to lay out, I just watched it into my glove.”

Even the opposition was appreciative of the play.

“That’s baseball,” said Mahon. “We can hit the ball right on the head but, boom, they’re right there to catch it. That’s why we love baseball, that’s why we hate baseball.”

After that play, De La Garza induced a pop-out to shortstop and struck out Gellman on three pitches to secure the victory.

“They’re pitcher was on from the get-go,” he said. “Give him all the credit in the world. He came in and was throwing his curveball for strikes. When a pitcher does that, it’s hard to bounce back.” 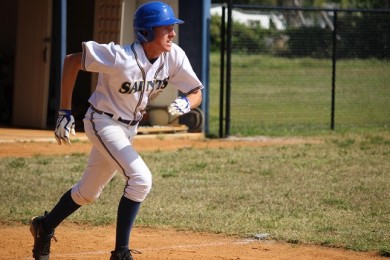 Noah Aterburn burst out of the box after driving a ball into right-field for a double.

“Overall, I thought we played pretty well today,” the manager said. “You know, the game of baseball just caught up to us.”

While Atlantic Christian remains in the thick of the district race, Gonzalez and his players aren’t really thinking about that.

“My focus is just getting these guys better,” Gonzalez said. “This game was awesome. I feel like this was probably the best game we’ve played as a team. I’m just happy for these guys. It was Senior day and they took care of business and I’m proud of them.”