Overview – The Chargers have an excellent chance to win their first district championship under second-year Manager Brook Cross. Suncoast handled Palm Bay by a combined score of 17-1 in their two meetings this season, and should the team take care of business in their semifinal meeting it will find itself into the title game against Bayside. The Bears split the regular-season series and earned the top spot via a pivotal tiebreaker.

1. Bayside – The Bears have put in a quality 2014 campaign, which got off to a great start with a shutout victory over Class 3A state champion Melbourne Central Catholic. Shutouts were a regular occurrence for Bayside, as the club recorded four shutout victories on the year. Pitching has been a big part of their success overall, as he team allowed just 62 runs all season. 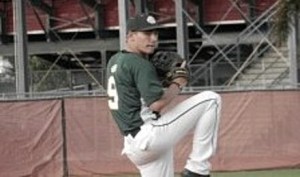 Chaz Kaps is among the top players for Suncoast.

2. Suncoast – The Chargers have every reason to believe they can win a district title this season. The team handled their semifinal opponent Palm Bay during the regular season, winning both meetings by a wide margin. Should Suncoast continue that dominance, it would next play in the championship game against a Bayside squad that they played very tightly this year. The Chargers won 5-1 their second time around, and also came up just short 2-1 in the first meeting.

Over the past few seasons Suncoast has proven that it plays its best baseball during the postseason. The Chargers have advanced to the regional playoffs each of the last two years, and both times came up just short against a very tough American Heritage program. A district championship this year would not only give them cause for celebration, but they would build a lot of momentum and also earn the right to host the regional quarterfinal game.

Pitching has been the team’s forte, and this year it has been better than ever. Chaz Kaps emerged to lead the starting unit this year, leading the squad in both strikeouts and wins. Meanwhile the team has had the steady and reliable arm of Will Engel in their pitching arsenal, and Engel has proven up to task by posting an ERA well below 1.00 this year. The club also has depth, with Matt Wolpert and Liam Lyons giving them the type of depth they will need for a deep playoff run.

Casey Goldenberg has led a potent offense, leading the club with nearly a .400 batting average and a pair of home runs. Engel has also been a big part of the lineup, hitting over .300 and being among the team leaders in stolen bases. Jorge Ramos and Michael Ali have also been big producers in the lineup, while Daniel Hein has helped to provide some more pop in the order.

Suncoast has come a long way over the years, where former Manager BJ Gilbert helped to transition the team into a contender before Cross came on last season to pick up the flag and drive them forward. The Chargers have not received the recognition around the county for their high level of play, but a deep playoff run this season could go a long way to turn some heads and make people accept that this is a team to be reckoned with.

3. Palm Bay – The district tournament hosts have struggled this season, and also had a tough midseason distraction that forced a coaching change. The Pirates were swept in the district this year and lost by mercy rule seven times on the season. Palm Bay has to hope that the home field advantage can motivate them to play inspired baseball if it hopes to keep its season alive.