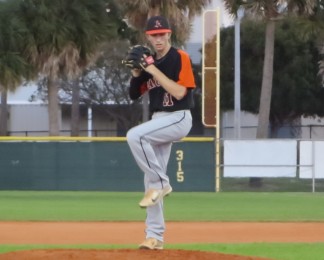 John I Leonard pitcher Kyle Lamb pitched a no-hitter in his first start in over a year.

No matter the level, a no-hitter is a very special and rare occurrence. Since 1896, there have only been 282 no-hitters in Major League Baseball. The collegiate ranks have seen even fewer. On Thursday night, all those in attendance at Suncoast High School got to see one as well, as sophomore Kyle Lamb threw a no-hitter in a 1-0 victory over the Chargers.

“Before the game we all got together and said let’s forget what happened the last game,” Lancers Manager Roger Vasquez said. “The least mistakes we make in this game the better chance we can keep our pitcher in the game the whole time.”

This wasn’t just any no-hitter for Lamb. In addition to the temperatures dropping down into the low 60’s, it was Lamb’s first start on the mound in over a year. Lamb sat out his entire freshman year and part of this year with shoulder problems, and was getting his first start of 2014 in a big game against Suncoast. Lamb made the most of it and turned it into even more of a special night.

Lamb almost didn’t get the opportunity to pitch his no-hitter. Vasquez thought about pitching Lamb two nights ago down 10 runs in a 15-3 loss to Boca Raton. If he had done that, Lamb would not have been available to start against Sunocast on Thursday night. Ultimately he didn’t enter that game and Vasquez couldn’t be prouder of his pitcher.

“The tenacity that Kyle Lamb has and the desire that he has to win the game is what he did today,” Vasquez said. “We knew we were going to get that performance from him. So I’m always confident when I have him on the mound. The only thing we have to do is step up our defense, and the defense, especially in the outfield, was amazing.”

In Lamb’s seven innings of work, he faced more than three batters only twice and faced only two more than the minimum 27 batters on the night. Both Lamb and Suncoast pitcher Matt Wolpert went pitch for pitch most of the night, each shutting the opposing team’s offenses down through the first four innings. 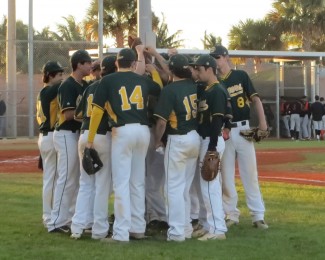 Suncoast played the second leg of their back-to-back-to-back on Thursday night.

It wasn’t until the fifth inning when John I Leonard scored their first and only run of the game. As if he had not done enough already on the night, it was actually Lamb who crossed the plate for the Lancers when the catcher for Suncoast overthrew his second baseman in an attempted pickoff play. This allowed Lamb to come around and score from third and give his team the lead.

Shortly after crossing the plate is when it first occurred to Lamb that he had a no-hitter going.

“In the fifth inning I was sitting in the dugout and I was talking to Chris Monteagudo because he let me borrow his shirt. I started to say ‘hey Chris if…’ but I didn’t want to jinx it. What I was thinking was ‘If I get this no-hitter then I’m keeping this shirt forever’.”

He didn’t falter though, sitting down the final nine batters of the game in order.

“For the seventh inning I was trying not to focus on it, which was hard,” Lamb said. “I was focused on hitting my locations and hoping my defense made the plays behind me, which they did.”

For Suncoast, they will play their third game in as many days Friday when they head to Palm Bay. John I. Leonard will head into Spring Break with some momentum to work off of as they prepare for the stretch run of the regular season.