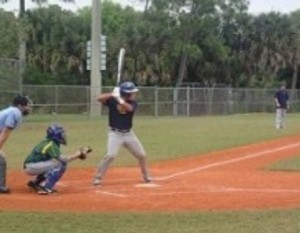 Ronald Ramadan hit an inside the park home run in the first inning.

A few months ago, the students and coaches at Atlantic Christian Academy weren’t sure they would be able to field a varsity baseball team for the 2014 season. It’s a good thing they did.

Ariel Gonzalez, the youthful and enthusiastic manager that was tasked with leading the Saints into their inaugural season, was able to scrape up enough “athletes” to pair with a core of five or six of what he calls “baseball guys” to not only take the field, but jump out to a 3-0 start in district 2A-12.

Meanwhile, fellow district member Wellington Christian is in its final season before closing their doors. With four seventh graders in their line-up, the Eagles are a young team. But what they lack in experience, they make up for with their eagerness and desire to improve. Manager Robert Pettet instills in them the importance of playing the game the right way and as a result they have started their 2014 campaign with a 1-1 record.

On Thursday evening, these two teams, both heading in opposite directions, squared off at Seminole Palms Park in Royal Palm Beach. For a while it was close. The Eagles hung with the Saints through the early innings, trailing by only one run after three, but eventually the big bats of Atlantic Christian got the better of them. The Saints combined for nine runs in the fourth and fifth frames to walk away with a 14-4 victory and remain unbeaten.

For much of the young season, Sophomore Ronald Ramadan has been a top performer not only for the Saints, but in the district. It was no different on Thursday when he started at third base and batted clean-up. He tallied a hit in three of his four at-bats and drove in five runs in the process.

None of those hits, which included a single and a double, were more exciting than his first.

After Petru De La Garza ripped an RBI double into right field in the second at-bat of the game, Ramadan stepped in with one out and De La Garza in scoring position. On a 1-1 count, he went opposite field, splitting the right-center field gap with a fly ball that eventually rolled all the way to the fence, while Daniel Hall and Justin Hunter of the Eagles gave chase. Ramadan was already rounding second before they retrieved the ball and from there, there would be no stopping him. He wheeled around third and slid home for an inside the park home run.

“Coach told me to stay back on the ball,” Ramadan said. “That was one of my defects back when I was little. I couldn’t hit slow pitches so he would just tell me to sit back and go the other way, and that’s my strongest point right now.”

As if to prove it, his RBI single in the fourth also went to right-field.

Jack Dunstan, a burly sophomore, got the start for the Eagles, and responded well even in giving up the early runs. He caught the next two batters looking to strikeout the side and prevent any further damage. In the second, he struck out two of the first three batters he faced as well, and rang up seven total for the night.

“He’s really progressed quite a bit,” Pettet said, in sharing how excited he is about what he sees from the right-hander. “He played during the summer with us and he learned a lot, really stepped up. He really wanted to advance and it’s all his work.”

Dunstan’s counterpart, Jairly Argus, seemed to deal with some early game jitters in the bottom of the first and Wellington Christian took advantage. Eagles shortstop Drew Beno singled to lead off and later scored on a wild pitch.

Next up, Alejandro Garcia reached on an error and Stephen Pettet loaded the bases with an infield single. Garcia came across for the second run when the Saints unsuccessfully tried to throw him out at home on a ball put in play by Jeremy Sadofsky. Pettet tied things up on a passed ball with Andrew Sadofsky at the plate in the next at-bat.

“The kids are starting to figure out that we have to play for each other,” said Coach Pettet, who loves small ball and preaches the importance of manufacturing runs. “It’s like what we did when we had runners on. We didn’t have big hitters but we had hitters that were coming up there to advance the runners.”

After Atlantic Christian gave Argus two more runs to work with in the top of the second, he calmed down in the bottom half, striking out two in a 1-2-3 inning. On the night he would go three innings, allowing 4 runs (only one earned) on just three hits, while striking out five. 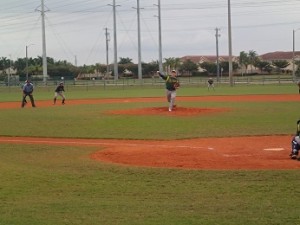 One of those unearned runs came in the bottom of the third. The younger Pettet reached for the second time in as many at-bats. He advanced to third when Dunstan drove a double into center field and then scored when Ramadan chose the force out of Jeremy Sadofsky at first rather than take the chance at home, bringing the Eagles within a run at 4-3.

The Saints got some insurance in the fourth when Dunstan seemed to tire a bit. He led off the inning with one of just two walks on the night and then gave up an RBI triple to another of the Saints early season stars, shortstop Chris Perez. Perez scored on a Ramadan single.

Carlos Rodriguez moved from behind the plate to the mound in the bottom of the fourth and brought the Saints home. He struck out four and allowed only one hit in two full innings of work.

On the offensive side, Atlantic Christian batted around in the fifth once Wellington Dunstan left the mound to man third base. Taking advantage of a bullpen weakened by the loss of star lefty Kyle Berkowitz, who sat out with a sore arm, the Saints scored seven runs while walking five times.

They also notched four hits, including a two-run double by Ramadan, a two-run single by Nathan Ho, an RBI single by Noah Aterburn and a single by Argus. The big inning gave them a ten run, 14-4 lead and ended the game after five innings.

Considering the adversity his team faced, senior first baseman Petru De La Garza is excited about their 4-0 start and the direction the club is heading.

“Coming into this year I didn’t even know if we were going to have a team,’ De La Garza said. “When I heard kids started wanting to come out, I was happy.”

Not lost on him is the fact that many of those kids are relatively new to the game and look to veterans such as himself for guidance.

“I know I’m there for them, most importantly,” De La Garza said. “Coach always tells me that you’re there for them first, instead of yourself, because you’re a leader and you’re a mentor for this team.”

As far as “coach” is concerned, Gonzalez is enjoying the ride in his first season at the helm.

Not long removed from his college playing days, Coach Gonzalez sometimes wishes he could take the field with his players still. He jokes about switching jerseys with one of them and trotting out there, even if just for an inning. As long as they keep playing the way they are though, it hardly seems necessary.