Overview – Royal Palm Beach has been the most dominant team in the district for the second consecutive year and is seeking to defend its title. The other teams in the district will of course have something to say about that this week, including Royal Palm’s first-round opponent Palm Beach Lakes 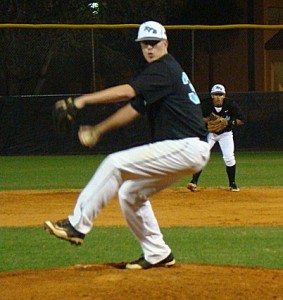 Jordan Lauginiger is among the Wilcats’ top arms this season.

1. Royal Palm Beach – With a 5-1 record in the district, the Wildcats, under the direction of new manager Bart Wible, have emerged as the top seed and will welcome Palm Beach Lakes in the opening game Monday. The Wildcats, who finished the regular season 13-13, handled Lakes 24-1 over two games this season.

The Wildcats, who have been in the regionals just four times in their existence, opened the season with a 5-4 loss to South Broward, and it’s been a slew of close games throughout the year. Twelve of their games have been decided by four runs or fewer. The result is a battle-tested squad that’s ready to defend their district title from last year.

The team had to overcome the loss of last year’s ace, right-hander Justin Lauginiger, who missed this season after having Tommy John surgery. As a junior, he went 10-1 with a 1.01 ERA and 79 strikeouts in 62.2 innings.

As a team, the Wildcats are hitting .292 with Justin Douglas the top hitter with an average around .420 with a team high in runs of at least 21. Bryant Miranda is hitting around .370, and Brandon Hernandez around .310 with about 17 runs. 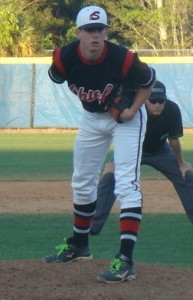 2. Santaluces – The Chiefs have had a kind of Dr. Jekyll and Mr. Hyde kind of season as they have won and lost in bunches. One of the teams Santaluces had trouble with this year is Royal Palm Beach, which beat them 4-3 and 13-1.

Other than Royal Palm, Santaluces has been strong in the district. Santaluces beat Forest Hill, the team it will face in Monday’s semifinal, 11-0 and 10-0, making the Chiefs the obvious favorite to win the game and move on to play the winner of Royal Palm Beach/Palm Beach Lakes.

The Chiefs are hoping to hydrate their playoff drought as they haven’t been in a regional game since 2005. The team has never been farther than the regional semifinals, which it reached in 1991 under Sam Howell and 2004 under Larry Greenstein.

Wager has developed into the team’s ace, pitching more than 40 innings, winning at least six games and striking out just over 50 with an ERA just over 2.00. Close behind him is Teresi, who has won just two games but thrown about 40 innings. His ERA is about the same as Wager’s, and he’s Ked about 30.

Forest Hill’s Chris Bautista is among the top hitters.

3. Forest Hill – It’s been a tough year for the Falcons, who have struggled to win the big game despite playing some of the top teams in the county. In the district, they scored a big win by beating Royal Palm Beach 8-2 early on, but lost 8-0 in the second meeting. Forest Hill also defeated Palm Beach Lakes in both of their matchups.

Forest Hill made a strong run during the GGI Baseball Classic during Spring Break, winning three games to reach the championship, where they lost to Atlantic.

The Falcons made the regional tournament last year for the first time in four years, but they haven’t been past the quarterfinal round since 2002 when they lost in a regional final. Forest Hill will be looking to upset Santaluces on Monday to get back into the regionals, but that will be a Herculean task considering the Chiefs have outscored them 21-0 this year.

Hitting has been a strength for the Falcons this year with the team batting average at .349 and seven players hitting .300 or above. The group is led by a trio batting .440 or better: Dustin Workman (about .480), Christopher Batista (about .450) and Corey Mahoney (about .440).

Michael Rosario leads the Falcons on the mound, throwing about 35 innings, wining four games and striking out about 30. Milliken follows with three wins, about 23 innings and just over 20 strikeouts. 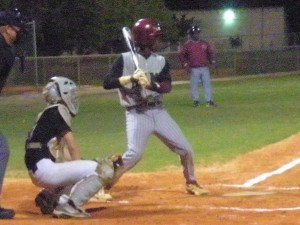 Although the coach wanted to get up to .500 this year, the end result will be a little less than that. Nevertheless, there’s real progress going on at Palm Beach Lakes.

After years of struggling each season simply to field a team, this year’s group has made the commitment to rebuild the program, as nearly every starter returned this year. This is a special group of players, a team that embodies the family concept, and a team that loves playing baseball together.

Last season the Rams broke a 70-game losing streak in starting to turn this program around, and the majority of the starters have now logged several years playing at the varsity level.

The Rams may not have matched up well with their district semifinal opponent Royal Palm Beach, but it won’t be a lack of effort that factors into their meeting Monday.

Garrett Manning is batting around .330 and Dominique Hale about .316. Hale has scored 26 runs, as has Roberto Rodriguez, who’s hitting .279.