2A-12 Playoff Preview: New Kid On The Block On Top

Overview – There’s a newcomer in 2A-12 this year, and it is dangerous one.

But defending 2A-12 champ Boca Christian is not ready to roll over and give away their crown just yet. The Blazers come in as the second seed, with their sights set on a repeat celebration as it lifts up another district trophy.

After two tight contests already this season, these two top seeds have already planted the roots for a nice district rivalry. Playing the rubber match in the 2A-12 championship would be the perfect way to add fuel to such a fire.

Lake Worth Christian and Wellington Christian come in as underdogs in a tough position, but not an impossible one. These young programs would have to rise up and play their finest baseball of the season.

But that is exactly what the playoffs are all about. 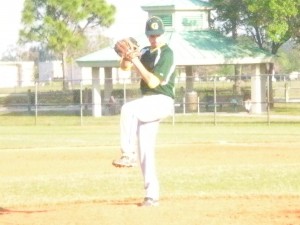 The Gators Thomas Corzo will be counted on for some big inning this postseason.

1. Glades Day – It’s a different brand of baseball that players are used to up in “The Muck”, which is the Belle Glade area where the Gators call home. This area is traditionally a football-first mindset, but this year Glades Day has a chance to bring some baseball glory to the school.

This season the program dropped down a classification to join 2A-12, and the team has performed well in its first time in the district to go 5-1 and earn the top seed. For years the team has struggled to get past teams like American Heritage-Delray, King’s Academy and Benjamin, but this year Glades Day finds itself positioned one win away from serving as the home team in the district championship.

Should all go according to expectations, the Gators would host defending district champion Boca Christian in the title match. The two squads split during the regular season, and it would only seem fitting that they play one more time for such high stakes this season.

Glades Day benefits from having a pair of reliable arms in Titus Johnson and Thomas Corzo, something that gives the squad a great advantage in a short week. These two sophomores have pitched the bulk of the innings this season.

The Gators have proven they can hit, scoring 166 runs in 19 games this year for an average of more than eight runs per game.

Jonathan Leon is the main cog in the offensive machinery, as well as brothers Jonathan and Jaime Rodriguez. Daniel Duncanson is relied upon for the most power and Noel Figueroa is one of man speedy baserunners.

Glades Day posted a 7-3 home record this season, and a district title would also ensure they team would start the regional playoffs with a big edge in making a team travel out to Belle Glade to face them.

The team finished with a winning record this season and excitement is in the air at their chances in the 2A playoffs after years of experience playing in a higher classification. 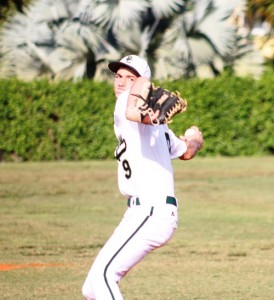 RJ Walsh is one of the Blazers most reliable pitchers.

2. Boca Christian – The Blazers have done all the right things to prepare for the postseason this year.

The team played a more difficult schedule than it traditionally plays, and also got some game in against teams it does not typically play. After advancing to the regional semifinals last year, Boca Christian matched its record this year of 12 regular-season wins, a feat that is more impressive considering the tougher competition they faced throughout the year.

For the second straight season, Boca Christian opens the district playoffs squaring off against Lake Worth Christian. The team has yet to lose to the Defenders since they began meeting one another last season in district play.

Should they earn that right to play for another district title, the most likely scenario would pit the Blazers against top-seeded Glades Day. Boca Christian defeated the Gators at the beginning of April, which will give the team the confidence it needs to repeat that feat.

Hitting has been the name of the game for this club, with a team batting average right around .350 this year. Tommy Havelka is among the county batting leaders with an average well north of .500, and he also leads the squad in extra-base hits.

Havelka has over twenty hits this season, as does Jonathan Kreh, Grant Gardiner, RJ Walsh and Jack Havelka. Rudy Lopez is among the top scorers in the county with 30 runs, as the Blazers tallied nearly 200 runs on the season.

Walsh and Kreh lead a pitching staff that has pitched well enough to keep the team in most ballgames, which is plenty effective with an offense as potent as theirs.

The Blazers rewrote their history book with last season’s postseason run, but this year the team has their eyes on adding that next chapter in their saga. 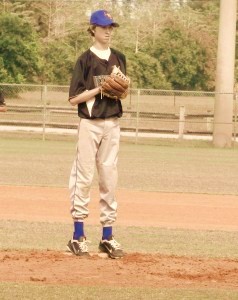 3. Lake Worth Christian – The Defenders have quietly put together their best season since 2010, a sign that this young group has got the team headed in the right direction.

The team advanced to the Class 2A regional playoffs last season as the 2A-12 runner ups, but to get back there this season Lake Worth Christian will need to get past a Boca Christian squad that has gone 0-4 against since the two joined the same district last season.

The most encouraging sign for the Defenders comes in knowing they played the Blazers tough in the district championship last year, falling 3-2.

Lake Worth Christian has excelled at getting on base this season, with a team on-base percentage close to .400 for the year.

With a tough opponent like Boca Christian, every base runner will be crucial.

Leading the Defenders’ offense has been Jordan Marrs, who is tops on the club in hits, batting average and RBIs. The offense also has relied heavily on the Piccardi brothers, Vinny and Matt, and Scott Lucas leads the team in runs.

The biggest area of concern for the team is its pitching, which has struggled at times. Jordan Marrs again leads this unit with a 3-1 record, and he is averaging a strikeout per inning on the mound.

A big upset victory is not entirely out of the question, but the Defenders will need their best performance of the season to do so. Fortunately the team also has the benefit of hosting the district tournament this year, which gives them some home field advantages. 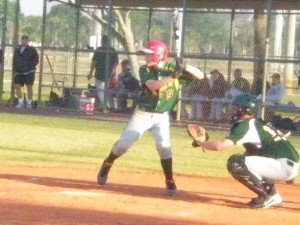 Kyle Berkowitz is one of the young core players for the Eagles.

4. Wellington Christian – Although the Eagles have had perhaps the toughest season of any Palm Beach County team, you wouldn’t know it by watching them carry themselves.

As a whole the squad is incredibly young and it is a simple biological disadvantage in that they are playing teams built of players whom are primarily a few years older and more developed then they are. At most other schools they would be playing at the junior varsity level.

But instead the team makes a tough and smart decision to tough it out and buy into the long-term goals for the program. The players have bought into the system under Manager Robert Pettet, Coach Jay Rogers and the assistant staff, and the team plays the game the right way.

Watching the Eagles play one would never know how things are going from their body language, as the players are always upbeat and positive. Although the execution is not always there, the fundamentals are very ingrained and the players all go through the motions looking identical, a sign of the coaching instilled in them all.

The core of the team is Kyle Berkowitz, Steven Pettet and Zach Rogers, three young players who embody the spirit of the game and who rally and motivate their teammates. The strength of the team is their speed, and they are aggressive on the bases when they get runners on.

In their opening round game they will face Glades Day, a team which they have not fared well against this season. But this group will show up and play the game the right way, because they know that every varsity inning is priceless and that their day will come.