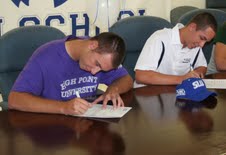 It was a banner day for the baseball community in Palm Beach County on Wednesday’s Early Signing Day, as 17 players signed with 14 different colleges.

Baseball is on the rise in the area, and Wednesday’s big day helped to illustrate that point.

“College coaches are so limited, and it helps these kids tremendously to get extra exposure,” Jupiter coach Andy Mook said, while also celebrating as Kyle Keatts (Tennessee Tech) and John McCarthy (Army) both signed Wednesday.

“Recruiting is difficult, because you are competing against guys you love and play with,” Barash said of the recruitment process. “But in the end you have to take care of yourself too. Enjoy every moment of the recruiting process and try to get as much information as you can. Make the right pick for you.”

Barash will graduate in the winter and begin playing for the Tigers this spring.

Also signing from Dwyer was shortstop Hunter Hope, who signed with Tulane.

It was also a big day for The Benjamin School, where four players signed. Elon University landed D.J. Paone and Matt Harris, while Kody Ruedisilli signed with Wofford University and Brian Dolan with Union College.

“It’s nice to see the kids rewarded for all the hard work,” Wellington coach Scott Riddle said. “The ones who have signed early have made baseball a priority, and there is nothing else they’d rather do in their lives.”

The chance to sign in the fall helps take the pressure away for many players, allowing them to focus on their senior year with less stress and anxiety.

“The big task now is not to get complacent,” Coach Mook said. “I can’t say enough about the kids; they deserve everything they get. But the task we have is to still make sure we get them ready for when they get there.”

Pope’s Zander Retamar agrees that thinking and planning for the future can get in the way of preparing and working for it in the present.

“If you get jumpy it can affect your game,” Retamar said. “It’s a tedious process and it can be stressful. I just say to be patient and trust that your time will come. Just keep working hard and it will happen.”